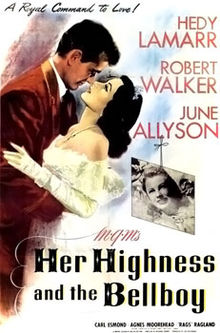 I was surprised and delighted to find an old movie in my local library that I hadn’t seen. I’m happy to say I wasn’t disappointed by it.

Quick synopsis: A modern day fairy tale (in 1945). A lonely princess (Hedy Lamarr) come to New York and befriends likable bellboy Jimmy (Robert Walker). The only other person the princess knows in New York is a newspaper columnist (Warner Anderson) she fell in love with six years before in her own country.

Jimmy is the friend and protector of not-too-smart-but-kind-hearted Albert (Rags Ragland). Together, they brighten the life of their neighbor, paralyzed dancer Leslie (June Allyson), who’s in love with Jimmy.

I can’t tell you anymore without spoiling it for you.

What did I think about it? It was cute. The cover and blurb were a bit deceiving, not mentioning the newspaper columnist.  The movie had a good bit of what I think of as “old movie charm,” by which I mean actors I recognize and like, characters who are sweet and good, and a style of comedy that is particular to old movies (though some British movies still have it).

Jimmy’s character was a bit naïve, but it wasn’t a serious movie, so I can’t really fault that. Leslie’s character pulled on my heart strings–a girl who can’t walk but who’s still joyful and unselfish. I loved how Jimmy and Albert made a show of taking her up to the roof, pretending they were on their way somewhere grand, just to amuse her and make her feel like she’d been out in the world. Then, Jimmy would tell her stories and read to her, entertaining a large group of apartment complex residents, all gathered on the roof to enjoy the night.

Princess Veronica was beautiful and kind, as all storybook princesses should be. She had my approval.

The ending was happy, though there was a disregard to royal responsibility with regard to the fate of the princess’s kingdom (very opposite to The Prisoner of Zenda) that bothered practical-minded me. However, since I can’t say anything else without giving away the ending, and since, as I mentioned earlier, it’s a sweet romance not a serious story, I won’t fuss too much about it. I’ll leave you to watch the movie to find out who ends up with who. Does everyone have a happily ever after? Or just Jimmy and Princess Veronica?

Overall: 4.5 stars as a cute fairytale